When James Walbourne was young he wanted to play in clubs around America and to fulfill his dream he left school to go on a tour in the US. James Walbourne became a member of The Kinks’ front-man Ray Davies’s solo band and of The Pogues. In 2008 he was recruited to The Pretenders by Martin Chambers just before the Breakup the Concrete tour.

In 2005 James Walbourne formed the band, Royal Gun, with his brother Ron Walbourne. The band however disbanded after a short tour of England and the USA. In 2010 James Walbourne started working on his first solo album named The Hill, this was later released in 2011.

James Walbourne and his Wife Kami have since founded The Rails and released their first album Fair Warning on Island Records. 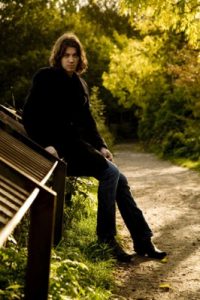 Never buy a used car. Whoever wrote that bit of advice was of a different time, a bygone era when money was cheap and it was assumed that regular people (that is, people who don’t make records for a living) had enough of it to buy new.

When I was given a six-year-old Ford Taurus (I think it was in 1998), I couldn’t believe my good fortune. When the transmission crapped out two months later, I made what at the time seemed like two good decisions: 1. I paid the $1,100 to replace the tranny. 2. I accepted an invitation to join an ill-conceived, sort of musical revue; an eleven date club tour of Holland. I figured I could use the dough to pay off the credit card used in good decision number-one. I was to do a solo acoustic set. There were three other acts on the bill. How bad could it be?

Well, it was a fucking nightmare on a number of levels. Here’s the short form: Thirteen relative strangers in a shitty fume-filled splitter van with no AC in June; a maniacal tour manager who chain rolled/smoked “enhanced” cigarettes while driving; pipe-clogging, digestion-halting Dutch food (ham, cheese, fries with mayo); thirteen people crashing on damp, itchy Dutch couches in strange Dutch houses… and how can I put this delicately? You put thirteen musicians together in this kind of situation and someone could quite possibly end up strangled in their sleep.

We all spent the first two days “in country” exhausted, drinking, doing interviews, some radio sessions and too much “I think it’s a good idea” handshaking with “influential Dutch club promoters.” Honestly, during those first days, the only thing (besides personal financial debt) that kept me from telling the tour’s ringleader to jam his tour up his ass was meeting James Walbourne (and Peter Bruntnell, with whom James was playing.)

The three of us hit it off instantly. James was 18 years old, and a really good kid, instantly likeable and sage beyond his years. Bruntnell and I are both at least a decade older than James, and like older brothers, we good-naturedly broke his balls to no end about little more than his limited sexual experience and the lack of prowess that comes with inexperience.

And then I saw James play. I was wholly unprepared. It was the first gig of The Bad Idea Revue. I thought they were going to blow. When you see two guys on stage with acoustic guitars, you say to yourself, “Please, God, make it go by quickly. And another thing, God, if you can, would you minimize the damage?” That’s the kind of asshole you can become when you find yourself on a tour such as I was.

May I be struck dead right here in this Toronto coffee shop if I did not say to myself that night in Amsterdam that I was watching a true genius in James Walbourne. Not some soon-to-be-forgotten adolescent media creation “raised on the blues.” Not some bullshit wankologist with a guitar shop perm who bores you to tears with cliched trips up and down the scales. Not even someone who was very, very good. This was a fully developed artist with other worldly ability. And he could sing like a motherfucker. And he was only 18. Guys his age were not in Holland playing shitty “character-building” gigs. Guys his age were home rubbing one out to Buffy The Vampire Slayer.

That was 1998. He has been a great friend and collaborator since. And he has been touring the world and recording with other acts since. Check out this partial resume:

Now, finally, after being the sideman to artists smart enough to recognize his formidable talent, James Walbourne is standing tall before a great album of his own. It’s called The Hill, named after Muswell Hill where he has always (and probably always will live.)

Since I am so good at dishing out advice (see PART I, Sentence I), here’s a bit more with regards to The Hill.

1. Don’t listen to The Hill if you prefer studio trickery to soulful and ridiculously talented people playing instruments with ass-kicking authority. I’ve told you how great James Walbourne is, but check out the rest of the lineup – Jim Keltner on drums, Ivan Neville on keyboards, Danny Williams (Black Grape) on bass James Fernally (The Pogues) on accordian and brother Rob Walbourne on second guitar. If you don’t recognize some these historically significant players, well, I don’t know what to tell you other than you have some serious makeup studying to do, son.

3. Don’t listen to The Hill if you prefer a bird’s nest of disjointed and pointless song fragments to songs (and don’t pretend you don’t know what I’m talking about.) The man can pen a tune. When I first heard the songs on The Hill, I was reminded of Tommy Stinson’s album Friday Night is Killing Me. Not because the songs are similar, but because with both albums, “someone else’s player” steps out and pulls it off handily. (And no offense to Tommy Stinson, but he has never played an instrument the way James Walbourne does.)